Another excellent turnout for race 5 of the 2014 Eric Smith handicap trophy saw Toni gain her second win of the year, sprinting home clear of  a big pack of runners, all chasing hard.  Andy Webster lead home the rest ahead of Dominic Egan and Jenson Brogden.  Setting off last and finishing just 33 seconds after Toni, Scott Harrington ran the fastest time of the night,  breaking Ian’s course record by one second!  It was good to see several first time handicappers, beginners and Jenson and Imogen from Hugh’s juniors.

All change at the top of the table,  Charlotte Tomlinson now leads on 92 points ahead of Dominic Egan 87, Toni Midgley 84 and Gemma Harrington 83.

See the full full table here, and for Graham , a few stats. were you faster, slower that previous years? see the full history of Otley handicaps here, including the Ex President Mick Jeffrey has now done 99 handicaps.  For the big list of the results. 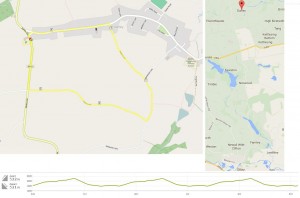