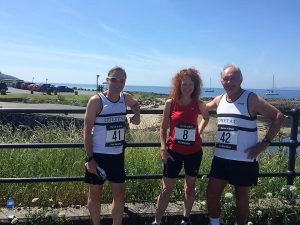 When you’re stood on the start line before a half-marathon and you’re told during the pre-race briefing that there’ll be five water stations and that residents will have hosepipes out to spray the field, you know that you’re in for an interesting time.

The Arran Half-Marathon, also known as the Shiskine Valley Half-Marathon, takes place at Blackwaterfoot on the west coast of the island and follows a route in the shape of a nine. Like the rest of the UK, Scotland is in the grip of a heatwave and history tells me that I’m not good in extremely warm weather but I’d prepared well in terms of hydration and nutrition.

At some point last Autumn I’d agreed to do this race with Tom Hannah, who’d run it two years ago when he was on holiday there, and about a decade previously when various members such as Jack and Kath had made a weekend of it. As well as Tom and I, Chris Brunold was also on the start line so we were confident we’d get the “mixed team from England prize” (which only existed in our heads).

The race started at noon and took runners on an undulating course inland, and without hardly any shade at all. The first couple of 100 metres involved a sharp uphill and the final mile and a bit was downhill with the finish line looping around playing fields.

With the pre-race briefing over the race started. I set off up the initial hill at a decent pace and as the road smoothed out I was aware of keeping my speed in check. All was going quite well until about mile five and then the heat got the better of me; after that it was a sip of water at each drinks station and a hosing down at every opportunity. Despite all of this I ended up having to walk the inclines (some of which were more than undulating) and it became a real mental battle. Chris went past me at about mile eight (when I was taking a breather on a chair at a water station); up until then I’d not known if she was in front or behind me.

When the 12-mile marker arrived I tried to up the pace but it was still a struggle, there was nothing in my legs even for running downhill. As soon as I was over the finish line I spotted a bit of shade next a car so I slumped down, and lay on my front gasping; my breathing wasn’t regulating and so the medics helped me to the race HQ and put me on a chair where I sat with my head on my knees while cold water was poured over me. Eventually I was able to eat a bit of cucumber and a couple of salt tablets given to me by another runner. I spotted Tom arriving and asked the medics to keep an eye on him as he wasn’t looking too good; but Tom being a real pro said he was okay and disappeared off across the road with Chris for a pint, which had been my original intention but the medics wouldn’t let me. When I was suitably recovered I was then escorted across to the pub to make sure I didn’t keel over on the way! 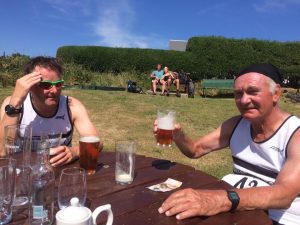