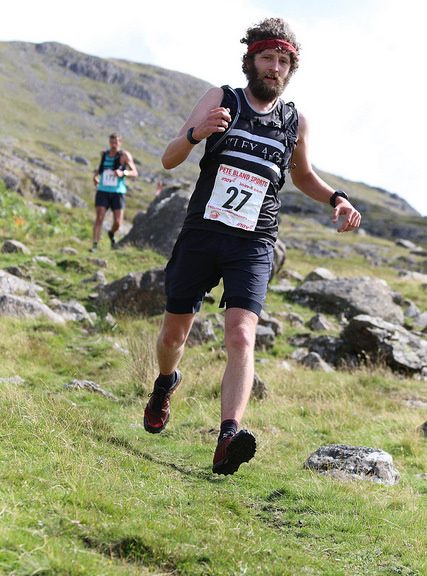 Not having the guts to do one of the really long Lakeland Classics fell races like Borrowdale or Wasdale, I fancied giving something slightly less brutal a go. The Turner Landscape fell race is held in the quiet and remote Duddon valley hidden between the Coniston fells and Eskdale. It’s such a beautiful and un-spoilt corner of the Lakes, I really wouldn’t recommend anyone goes there, just stay in Ambleside and buy cake please.

We were on a lake family tour of the north of England in the camper van, and met up with some friends from Fell and Dale, and the fell captain Tom Lynch and Tanya. The campsite at Turner Hall (which the race obviously gets it’s name) is wonderful, all hidden camping spots, streams, views. Again, I wouldn’t recommend you go there.

The race starts from the campsite, so after a couple of light ales the night before, myself and Tom lined up with nearly 400 other runners (it being an English Championship race) for the long, but not particularly steep climb up to Seathwaite tarn. I think both of us were taking it easy, and I passed Tom as he stopped to admire the view.

The majority of the climbing is done straight away, all the way up the rounded ridge up to Grey Friar. I felt good at this point, and still being ahead of Tom, skipped round to Swirl How. Still feeling fit I started the descent, only for my legs to remind me I’d not actually done much hill work this summer, at this point Tom bounced past me like Tigger, and I never saw him again. I was also losing touch with the runners I’d been happily running with for the last 5 miles and although feeling ok, my legs just weren’t having it.

The Old Man of Coniston was reached, and I just started enjoying the amazing views rather than worrying about racing hard. You could see Whernside way to the east, the brooding Scafell massif to the north west, Morecambe bay and the wonderful Sellafield Nuclear Power station (go visit there rather than Duddon valley; great gift shop).

You can virtually see the end now, but it’s still a fair way off. The winners had finished by the time I got to the Old Man btw. You skirt a few of the lesser summits, before hitting the top of White Pike and heading down, steeply, to the finish field. At this point I was running with a  chap in his late 60s from Totley who was happily chatting away as I grimaced and prayed the cramp wouldn’t set in. I also tried a sprint finish, but failed miserably, the victor later told me it was her 50th birthday and so she wasn’t going to let me beat her. Fair enough.

A great race in a wonderful place, which I’ll definitely be going back to! OK, maybe we should get an OAC camping trip there next year (just don’t tell your friends).

p.s. Note the difference in expression and style below: a picture writes a thousand words!

p.p.s. In the last picture note the chap from Totley who finished just behind me, but also Ben Grant v70 of Harrogate who finished 9 minutes ahead!! Incredible. 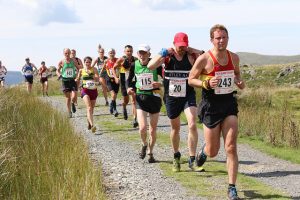