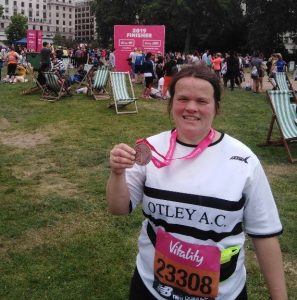 I’ve taken on this particular run a few times before – having lived in London for almost 3 and a half years, I’ve got a strong connection with the place and it’s a great opportunity to run on some of the city’s most famous streets traffic free. I was particularly looking forward to it this time having hobbled slowly round last year due to an injury.

There seemed to be a lot more people gathering in Green Park than previously – the dreaded toilet queues were some of the longest I’d known and the wave start system meant that I could see the faster runners finishing as I made my way to the start.  I later found out that a record number had completed the race – 19,465, which is huge for a 10k

It was just over an hour after the race’s official start that I set off – the first ‘k’ involved a bit of weaving in and out as parts were quite narrow for the volume of runners but the cheers started straight away as crowds lined the route through Trafalgar Square and out into the Strand – Typically as has happened in most of my recent races the sun came out strong and I was thankful of an early water point at 3.5K.

As the route wound out and back through the financial and legal districts of the City there weren’t any crowds here so this is where you dig in and really take note of the runners around you.  I saw lots of brave ladies running in their underwear with their names emblazoned on their knickers running for the ‘Celebrate You’ campaign.  The noise really hit me when I entered back into the Strand and the last few kms just seemed to fall away as I passed the famous sights of the Cenotaph, the gates of No 10 and the Houses of Parliament.

I loved the finishing stretch along Birdcage walk which is also the last part of the Marathon route and remember the shouts of ‘Sprint’ at the 100m to go sign encouraging us all to race across the line.

It wasn’t a PB course due to the volume of runners – I finished in 1:08:51 but I was pleased as it was 5 minutes faster than my last 10k race.  I also really enjoyed it – it’s not often you get chance to do a 10k packed with so many famous landmarks!