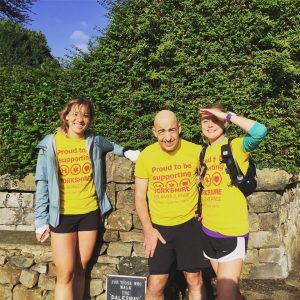 Earlier this year in a moment of madness, Andy Webster, Rebecca Harpur and I decided to run the Dales Way. At 82 miles, this would be more than twice the distance any of us had ever run! Thankfully, running for charity – Yorkshire Air Ambulance and Leeds Cares – provided motivation not to bail.

Training was suboptimal to say the least. Hamstrings, ankles and busy lives prevented us from getting any significant mileage in.

The night before the race we stayed over before to maximise sleep. A spectacular rainstorm topping up the bogs served as our morning wakeup call!

Skies cleared by the start and it was a perfect day to run! After breakfast, including Andy’s rather questionable choice of chocolate milk, we set off.  Our first navigation fail of the day came quickly – walking in the wrong direction to the start!

We started slowly, the pace feeling unnatural but necessary! The views of Windermere and the South Lakes were stunning as we ran along tracks by the river. Becky had a minor fall into a stream and some nettles but we otherwise arrived at check point 1 unscathed!

Early on my difficulty with gates became apparent, leaving me in sheep poo on all fours much to the amusement of the runners behind.  Andy appeared to be struggling early on, but after some food, rest and a pep talk from Matt Podd at check point 3 in Dent he got a rather impressive second wind. He was clearly feeling better when he started chirping up and questioning my navigation skills…

Dent to Gearstones was boggy and tough and we had not yet reached half way! We met a solo runner who was broken in body and spirit, who ran with us until checkpoint 4. Here, the fantastic support team patched us up, fed us and lifted our spirits ready for the evening and night ahead.

The route from here offered spectacular views over Ribblehead viaduct and the 3 peaks as the sun dipped in the sky. Torches and layers went on for the night.

Getting to Buckden was challenging. My feet were in bits, making progress slow, but Becky kept me running and Andy distracted me! Some dry socks and blister plasters courtesy of some Skipton AC supporters helped save my race. Unfortunately, dry socks did not aid Andy with the nail in his shoe. Eventually we made it to Buckden where hot drinks and friendly faces sorted us out!

The path onwards to Kettlewell was over dark, boggy moors filled with sheep with luminous eyes and some rather aggressive bulls who did not appreciate our presence in their fields. Kettlewell itself had a creepy scarecrow festival on that felt like it belonged in a Midsomer Murders scene.

Eventually dawn broke, in sight of the Bolton Abbey estate – home turf! We shuffled onwards as the sun rose over the misty fields, with Becky doing a great job of keeping us running. Addingham approached, then out of nowhere the finish, which we had to run past to get the all important picture of the sign indicating the end of the Dales Way! We managed to drag ourselves over the line 6 seconds under our target time of 24 hours!

This was a fantastic experience and the organisation and support was second to none, as always in Ryk’s Punk Panther events.

Andy and Becky were genuinely amazing. They kept me going through the low points and I am not sure we could have done it had we not stuck together! Hats off the all the solo runners out there – Matt Pod I don’t know how you did it alone – absolutely cracking time and 1st MV 60!

We have raised over £2000 for the charities – thank you to all those who sponsored us.

Would we do it again? Yes, without a doubt! 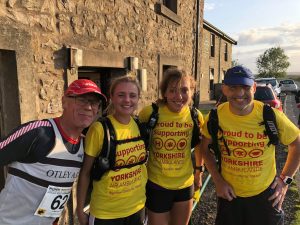 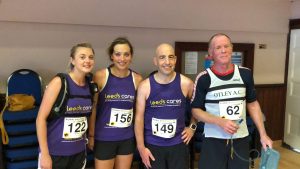 One thought on “Dales way ultra – better late than never”