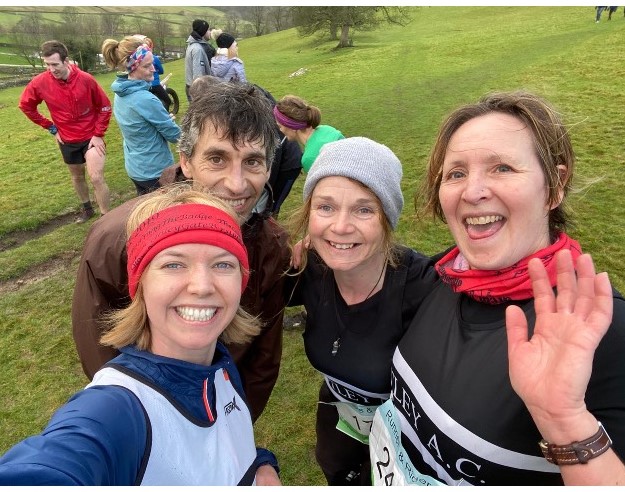 Myself, Caron, and Megan McCall travelled up to Appletreewick with Sharron Smith, arriving in time to take a precious hard standing space in the car park field and met Antonio in registration in the pub.  The tractor was there ready for towing cars out of the mud…

This race was started last year to celebrate the organiser, Ted Mason’s, 40th Birthday.  The race route is over his own farm land out the back of Appletreewick towards the Pateley Bridge, Grassington road.  The steep start is to the advantage of the runners, but after that riders came speeding past on the gravel track taking us out towards the road.  A left turn took us over much rougher terrain, so it was now the runner’s turn to over take.  A couple of riders over took me again on a fast section before a steep descent and climb out of Barben Beck and showed amazing skill to stay on their bikes contouring the short steep section between the descent and climb.  After the steep climb out of the beck we were soon back on the outbound track and the zigzag descent to the finish line.

All in all a good route, a bit of everything apart from rocks, which is good for me.  Despite the muddy nature of the route a cyclist took the honours for the second year. David Mirfield of Hope Factory Racing, 27:38, 1st runner, 2nd overall was Harry Coates of Wharfedale 30:33,  1st female (running), was Victoria Wilkinson 33:52, 1st Female cyclist was Nina Benson, Ilkley CC, 40:28.

The barn opposite the start/finish are hosted the post race refreshments, tea, coffee, egg & ham sandwiches and lots of cake.  The presentation was in the pub, but we were satisfied by at least a couple of helpings of cake!  The race raised over £800 for the Upper Wharfedale Fell rescue who were on hand marshalling on the day.

Before & After race selfies, which is which? 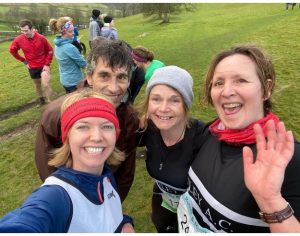 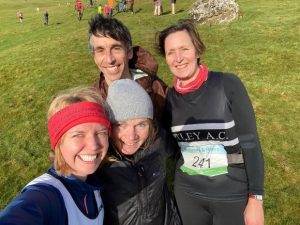 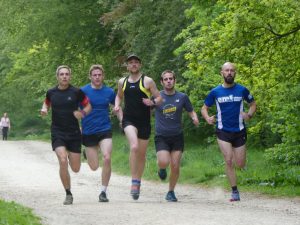