On the grounds that I could plausibly claim to be an elite athlete – (given England vest last year for 1/2 marathon and well up in age-group ranking this year for 10m and 20m)  – it seemed I was permitted to travel for competition – so I went to the motor racing circuit at Oulton Park to join in an extraordinary morning of running.

The marathon (10 laps of the motor circuit) started at 9am, then there were 20-mile and 16-mile events scheduled to start at 9.30 and 9.45, then the half (5 laps) at around 10am, followed by 10k and 5k between 10 and 11am. With all the races, the runners were walked continuously in spaced-out crocodile formation through to the starting mat, and chip times were taken. Because the circuit is fairly wide, there was plenty of space to pass and be passed by other runners.

Running on smooth traffic-free tarmac was a bit of a treat, but I’d thought that motor racing circuits would be flat – no chance, all gently undulating. One corner was quite steeply banked – felt like running across a hillside.  It was cheering to see and hear a young lad at the trackside playing soprano sax along with his ghettoblaster – he managed to keep going for the whole time I was running.

The timing of the various races meant that we were all overlapping and it was impossible to tell who was in which race. At the end of my third lap we were coned off to the left then I was surprised to see runners coming towards me – it seems because of the odd distances the 5k and 10k races had an extra out and back loop.  The organisation was excellent – plenty of free parking, loads of marshals, bits of food and drink at the end and no need to register – numbers and chips came by post.

Since I was the only one in my age group not surprisingly I was first V75 in 1.53.02 – my fastest half time for just over 10 years. Maybe all that trudging across muddy fields and boggy moors is doing some good. It was also my 1240th race since joining Otley AC, and 147th since hip replacement, but still yet another new experience – parallel races and some sort of mysterious lap-counting technique so that the marshals at the end of the circuit knew which runners were finishing and which had more laps to run. It’s a privilege to be able to take part. 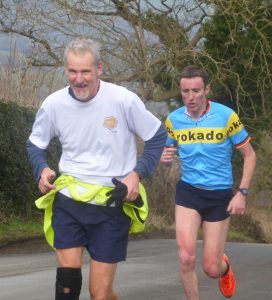