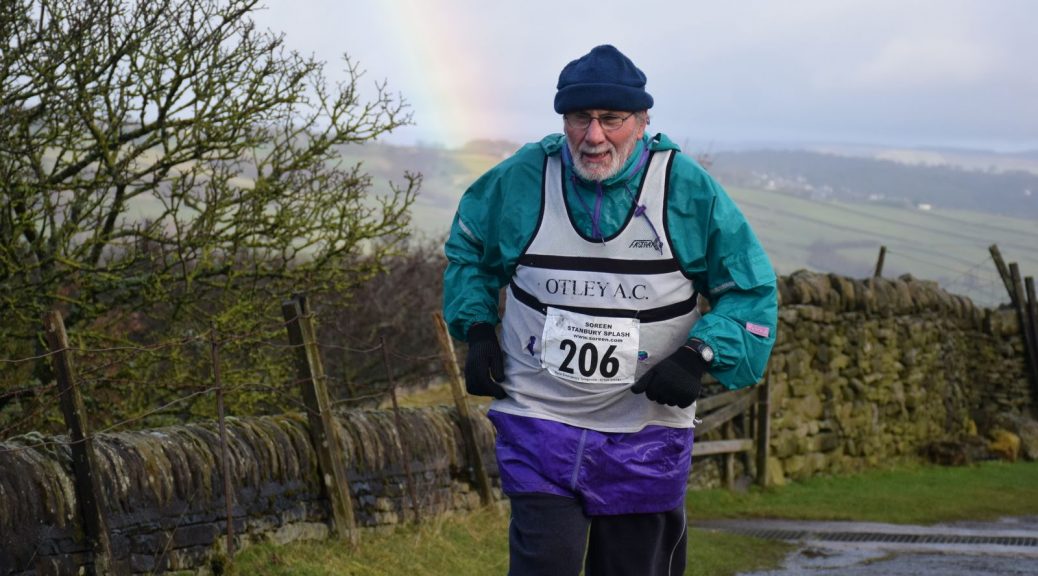 As always the Christmas handicap is also the decider for the Eric Smith handicap trophy, Nick had a 3 point lead over Antonio and Catharine Dobson.   Because Swinsty dam is closed for the winter this year’s Ken Dixon was a 3 loop route, the usual Timble village loop, followed by  loops of Fewston and Swinsty Hall.

…and the winner is….

Antonio wins his 3rd Ken Dixon Christmas handicap and with it a narrow 1 point victory in the Eric Smith Handicap trophy, over Nick Hodgkinson, a strong run the David Fox saw him move up to third also just 1 point ahead of Catherine Dobson.  see the final handicap table here.

I had Bob under my sight all the way,   I just could not close the gap , although I gave everything I had I also throw the kitchen sink at him,  he was a devil on the course dreaming to win the Championship,  on the finish line near the dog bin I was destroyed by the effort instead he was happy like lary because I did not get him and he was fresh like a rose instead I could hardly walk and I was all wobbly and he went to the car like jumping for joy.

And of winning his 2nd Eric Smith Trophy

Since Joining the club in Dec 2000 , I just loved to do the Eric Smith Trophy series of races that I won in my first year in 2001 doing the Ken Dixon in around 41 minutes  . In this peculiar year I was a bit struggling with the virtual races and the turning point was the Weeton Handicap race again together with Bob Payne , because as a former road runner I could still perform well on the tarmac beating Bob who had a bad day . Instead at the most important race of the year  the Ken Dixon Bob Payne 76 years old did a great performance leading all the way until the finish line , although myself almost 72 years old I did a great effort to pass him with no avail,  as soon I was getting near him , off he went again with a powerful stride and not much I could do to stop him than to watch him disappear on the horizon.

Oh and Antonio overtook former handicap king Tony Allen with the most number of wins,  14 in 197 handicaps.

Struggling for motivation?  why not focus on the 2021 handicaps,  I had thought we’d do the usual Harewood Handicap for January, but with today’s lockdown annoucement maybe an Otley route might be preferable, to be decided shortly..