In my mind, this series began with Saltburn in Storm Ciara last February, which feels a whole lifetime ago. Given the long break, I actually tried to do some structured training for Wainstones, knowing it was going to be a tough day out for me – club hill reps and plenty of up and over the Chevin.

Thus, on race day #2, after a minor hiccough of forgetting my waterproof, but finding a friendly marshall to lend me one, I set off in absolute last place – the joy of ‘W’ – and finished my breakfast as I walked up the first of 6 rather big hills, with a couple of mini ones thrown in for good measure. The start had been staggered over 48 minutes.  I gradually caught up and overtook a fair few people, so the staggered start worked well for me psychologically! This route is hard, with the downhills being trickier to negotiate than the up, having lots of Lake District style wonky little stone steps. I chose not to stop at checkpoints and tried to maintain a steady pace throughout. This worked brilliantly until I realised on the final climb up Clay Bank – right after CP4, of course – that I had run out of liquid. Thereafter followed a tired and crazed stumbling through 2 miles or so of bog but still I did not succumb to some young lass saying “I’ve found a shortcut”. I mean, what’s the point of saving 200m after 27 miles? I overtook her anyway, After the bog fiasco the last half mile was most pleasantly all  downhill. Overall, a fab day out.

Race day #3 came round all too quickly and due to a myriad of excuses I had done very little running in between the two. I consoled myself with the fact that White Horse was a mile shorter and had to have less climb. The only problem was going to be the heat. This time we set off in 3 groups within 6 minutes of each other, so got quite bunched up on the downhill through the woods just after the start, some obviously finding that tricky. I had set off quite optimistically at a decent pace, with my extra water bottle – I was prepared!! – but what I struggled with due to the heat was eating rather than drinking. I felt unhappy from mile 12 and slowed to what felt like a crawl for much of the remaining 16 miles. The other problem I had was I hadn’t reccied any of the route, which led to an extra bit of hill that I really didn’t need! 3 ladies going past me didn’t help my mood any either. I was seriously contemplating not finishing around mile 22. Fortunately, I had spent much of the race yo-yoing with a cheerful guy who was also struggling, doing a similar run/walk to me, even on some flat stretches. We both battled on to the end doing the last 2 miles together.

96 runners took part in all. 1st was Stephen Kirk in 4:14. He might even have had more than 15mins on second place if he hadn’t run, and won, the Punk Panther 38 miler the day before *WOW*. 1st lady was Ruth Muir, St Theresa’s, (reversing places with the aforementioned Emma Lavelle-Wood) in 4:51. I limped in as 7th lady at 5:55 feeling rather sorry for myself. It transpires, however, that in the absence of Triple R, I got 1st FV50, so just as well I didn’t drop out.

Excellent organisation and marshalling as always from the Hardmoors crew. I love the motivational signs they have at checkpoints and other marshall stations, such as “ you’re not even a third of the way in”, “stop moaning you entered this”, “ if you turn round now you could still beat the 10k runners to the cake”…
For the White horse race there was extra water available with every marshall, for which I was amazingly grateful, and I believe they shifted the finish a few 100m to be in the shade. Bliss! Incidentally , I reckon it should really be called the Sutton Bank marathon because you don’t get to see the White Horse. Heyho.

Link to the whole series here 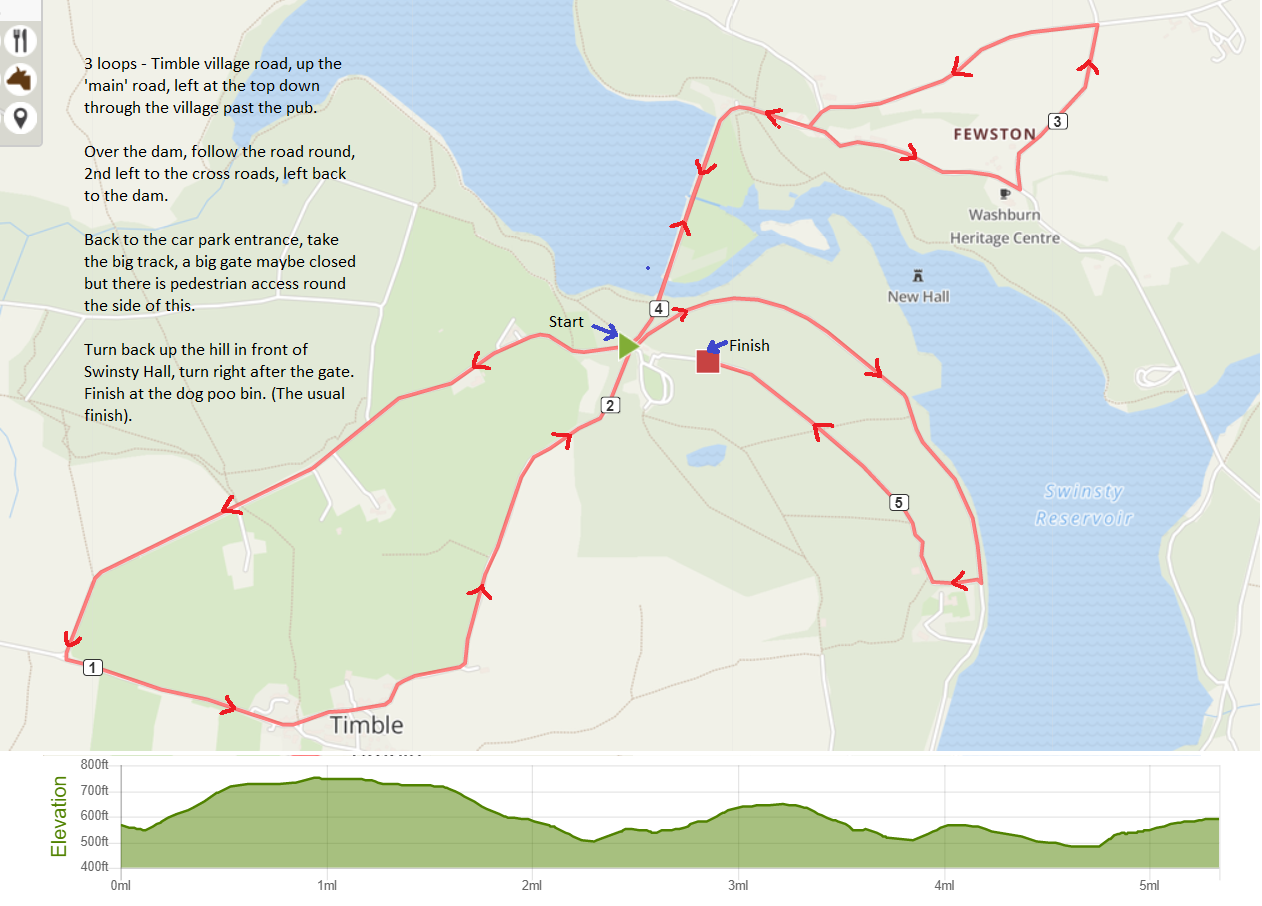 As the traditional route is out of action due to the work on Swinsty dam, the 33rd Ken Dixon Christmas handicap will use 2020 route, see map below. This is also the final race of the 2021 Eric Smith Handicap trophy, so after all the handicap racing over the year this race will see the trophy winner crowned, but who will it be?.  See the race report and results of the first race in 1989 here and here.
View Calendar
Add