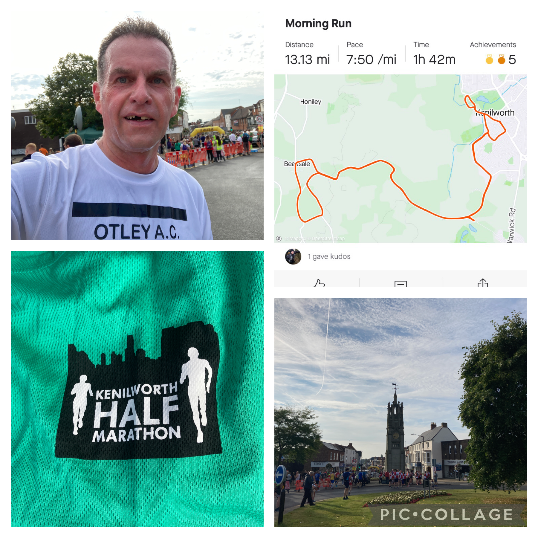 Another return to my childhood stomping ground and after the obligatory parkrun (this time Babbs Mill parkrun near Birmingham – two laps, flat, well made paths, well worth a visit!) it was great to toe the line in an actual road race and my first half marathon since the inaugural Ilkley Half in 2019.

Sunday’s run was very much about London Marathon preparation. Since my hip operation all of my marathons have been on trail, with lots of pit stops and a focus on completing not competing. So I was keen to see how I’d cope on the road with fewer opportunities to refuel.

I set out aiming for 8 min 30 sec miling pace but found I was comfortable running at or just under 8 min miles. It felt comfortable, despite the humidity, so I stuck at that pace until mile 10 when I felt I had enough in the tank to start to accelerate and was well chuffed to run 7:26, 7:40 (there was a hill!) and 7:04 for the last 3 miles – not that far off Saturday’s parkrun time!

Its the second time I’ve run the Kenilworth Half. There was a slight change to the route, taking the runners through the grounds of Kenilworth Castle at the start which was a nice touch, then an out and back on what locally are called hills, but more like Yorkshire flat! Lets say gently undulating. Its a nice route, very rural with good views, some good support on route and the start and finish right in the heart of the town. I think there were about five water stations giving out water in non-plastic cups. I decided to stop to take and drink at each water station, which I think aided rather than hampered my time.

Organisation was good, clear information, chip timing, not bad social distancing from most of the runners and a long sleeve tech T and drinks bottle to all finishers.

After so many marathons it was a joy to run 13.1 miles, so much more fun and so much less painful!

First overall and 1st male was Chris Sharp from Knowle & Dorridge RC in a time of 1:10:51

First female and 19th overall was Kelly Edwards from Leamington Cycling & Athletic Club in a time of 1:21:51

One thought on “Sunday 12th September – Kenilworth Half Marathon”

There are no upcoming events.