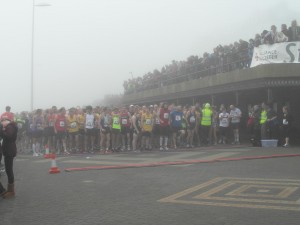 796 finishers on a very murky, fog bound Sunday morning on the East coast.

The Bridlington Half is a very popular road race and has been held since the early 1980’s and included the Yorkshire Veterans Half Marathon Championship, so there is always some top quality club runners about in all the veterans categories.

The start and finish are on the Promenade at Bridlington and the course took you towards Flamborough village, turn right and a four mile stretch towards Bempton, the home of the seagull colonies (although you didn’t go as far as the cliff face), then out into desolation with the murky fog giving an unreal atmosphere to the surrounding countryside, then the long run down Bempton Lane followed by the long run in to Sewerby Park and onto the cliff tops. 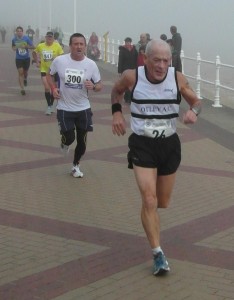 Normally you can see the the finish from about two miles away but not today! A last mile gallop onto the Promenade lined with spectators for the last half mile and then, trying to dodge prams and dogs on the run in, there in the gloom, the finishing line but the clock had stopped working!

The race was won by Paul Marchant (Rothwell) in 70.19 and Helen Cross (Pocklington) 21st overall in 82.10 (all gun positions and chip times).

Well done all the “Black and Whites”!

“Cool, calm and very foggy but perfect conditions for a fast time if you were up for it – which I clearly wasn’t. Very good performances from all the other OAC runners. Times reported are gun times which, as the results points out, are the official times. Ain’t been to Brid in 40 years but it but it doesn’t look to have changed a great deal – from the little I could see of it through the fog”.

Race report in the Telegraph & Argus.