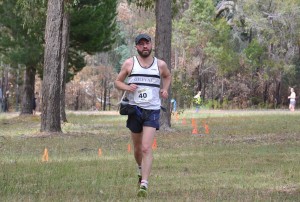 Unsurprisingly, I was the only OAC runner to complete one of the only trail marathons on the runners’ calendar here in Western Australia.

The 6 Inch Trail Marathon is held on the Munda Biddi Trail over a 28.5 mile course from North Dandalup to Dwellingup in the South West of Western Australia – about 50 miles south of Perth.

Starting at 4.30am because of the potential heat of the day, I dragged my family out of bed at 2.30am for the drive from Perth and because it was a one direction course, I had to get a lift somehow although neither of them were very impressed at all (and I can’t say I blame them).

They cheered up a bit when they saw the course which was extremely beautiful with rolling hills, forest tracks and even a little water on the ground in parts. There were also plenty of kangaroos and parrots around.

We started in the dark running uphill for about 3kms. On reaching the top it was just getting light which was just as well since we were in forest on single trail. There were lots of obstacles to jump over which was fine as my legs were still fresh at this point.

We stayed on these trails for about an hour and I could tell it was going to be tough by the amount of sand on the ground. Still, I had been training for this so I just ignored it and carried on.

When the sun came out (or it started shining in my face) it was around 6.30am and already upto about 25C degrees. I’m useless in the heat so I’m glad it stayed like this and didn’t get too hot for the remainder of the race.

After about 20kms, I took a wrong turn and wouldn’t have noticed if I hadn’t been faced with two guys running towards me who had made the same mistake but had figured out that they were well off course.

Thanks to them for setting me right and in the end I only ran about one mile extra after we negotiated a shortcut through the bush.

Luckily I didn’t stand on any of the local snakes that can kill you in hours.

The course got generally flatter the more we ran on and after some lovely lakes and streams I arrived in Dwellingup in a time of 4 hours 37 mins and finish as 27th male. Lovely morning out if you are ever over this way…

The crowd were great too and I got lots of, “GO ON OTLEY!” chants all the way around. They don’t really have the whole club thing over here so I think it was a novelty for them.

The race was won by James Roberts in 3.32 (although four people finished earlier but were disqualified).